We found a note written in a Houdini’s Secret Code in a tortured artist’s studio in an abandoned apartment building in Cincinnati, Ohio.

While exploring an abandoned apartment building we find that the room furthest from the entrance has recently been used by a tortured artist that wrote off messages, poems, and lyrics. Can you decipher the code? This code is the same of that used by Harry Houdini to communicate with his wife Bess. We posted the message on Reddit and a user, BiggerJ, solved the mystery.

I’ve started on the code. It’s the Houdini code. The nine solo words and the phrase ‘be quick’ correspond to numbers.
1 through 9 are Pray Answer Say Now Tell Please Speak Quickly Look. Be Quick is special – I’ll get to it.
It begins: Look, Pray Answer-Pray Tell-Answer Answer-Tell,
As numbers, this becomes 9,12-15-22-5,

The meanings of hyphens and commas becomes clear now. Commas separate words, while hyphens separate letters. 1 is A and 2 is B and so on, so the message begins with the words I LOVE.I’m not 100% certain about the usage of Be Quick yet. It’s got something to do with 0 and is used both on its own and following Pray. On its own, it may mean 10, while following Pray it may mean 20. Unsure. Should be easy to work out just from context once everything else is decoded. EDIT – Pray Be Quick means 20 – I’m guessing Be Quick alone means 10. EDIT 2 – A usage of Be Quick alone also represented 20. As ambiguities go, this was an easy one to decipher.

There’s a whole story behind this particular code. Houdini was a huge skeptic so he came up with a plan to debunk mediums using his own death to do it. He stated that, after his death, if his consciousness persisted into the afterlife, he would send a message in a magician’s code he and his wife knew. We now know the code and intended message – the unencoded word Rosabelle, the name of their favorite song, followed by a single encoded word: BELIEVE.

Oh man. This is written in the Houdini code. Learn about it here and learn the code here.

I’ve decoded it! (To find out how, see my other replies.)
The fourth line does not end in a comma like the others, possibly indicating the end of a sentence. The presence of a period after the single-letter final line implies it is an initial; the line’s size implies it is both the final part of the message and a signature.

I LOVE YOU STARS LOOKING WEST WRITE ME A SONG SEND IT TO Q.

We had to cut this exploration short because someone entered the building and into the hallway next to us where I heard them and they hid while we made our exit. The creepy factor is a 10. Cincinnati is a gem and we love making the trip south for these unexpected urban explorations. Check out our fellow explorer at https://www.facebook.com/HBCFilms/ 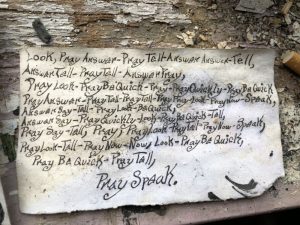